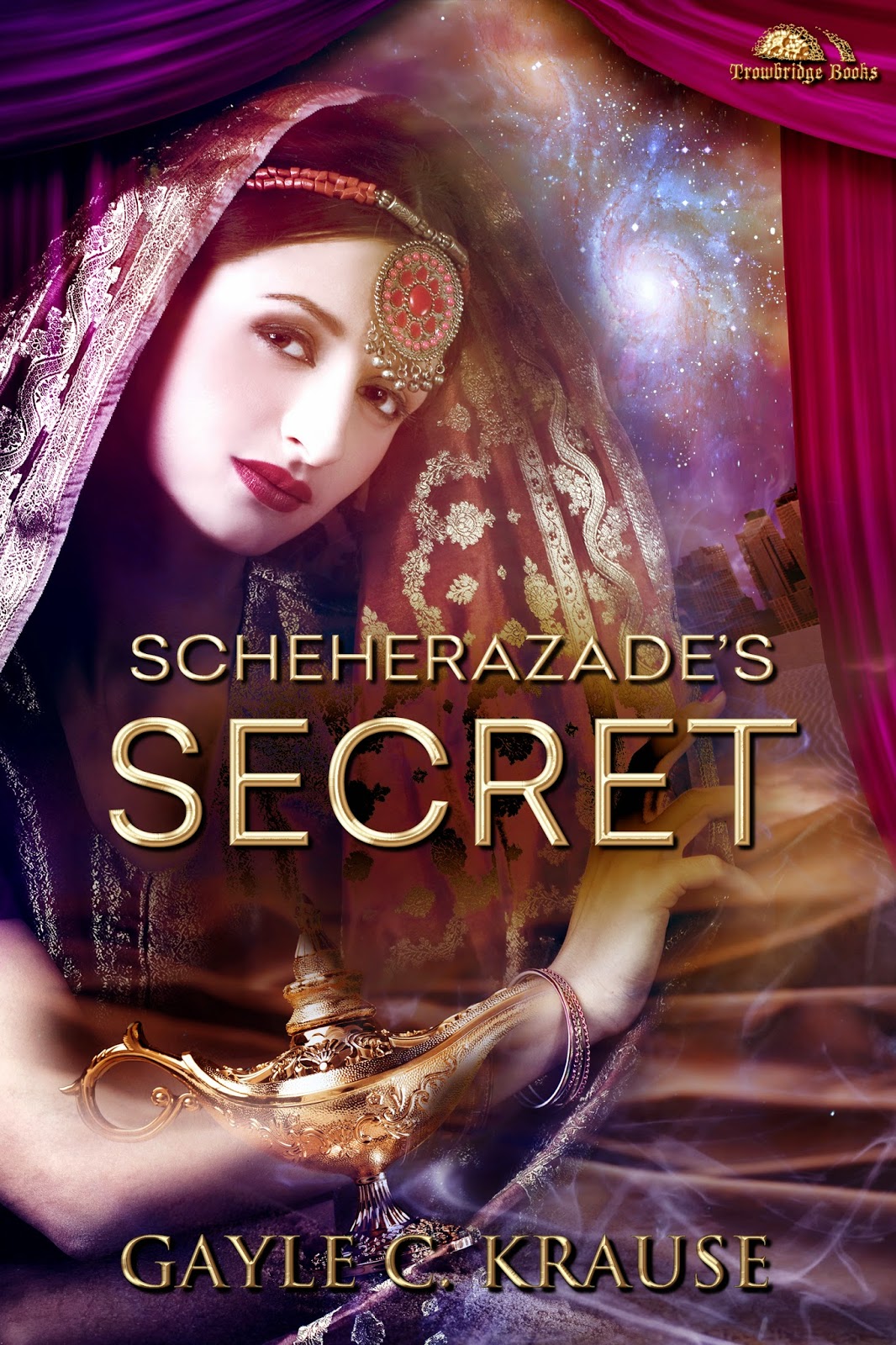 Since I’ve been hosting other author's characters, I thought I’d take this opportunity to interview the characters from my new e-book, Scheherazade’s Secret, which was released this week from Trowbridge Books, as a novelette.

“So, Herazade, I’m sure the readers would like to know more about you and Scheherazade’s Secret. Could you tell us something about yourself?”

“Well, when the story starts, my sister and I are nothing more than beggars. Our father is dead and the only things we have to remember him by are his stories.

Herazade shakes her head and sighs. “No. In fact we must be clever when we steal our food, for without our wits or our hands we would starve to death, thanks to him.” Herazade tilts her head toward the last chair on the stage.

King Shah-Bizhan, the tyrannical king, leans forward in his seat, stroking his wiry, white beard. “Let’s not exaggerate the facts, girl. You would have all the riches of my kingdom if you marry me.”

Herazade answers. “If I didn’t use my wits and my stories, neither my sister, nor I would live to even taste a honeyed fig, but you made it difficult. Thanks to Papa’s stories and this dented, old lamp, we survived your horrid plan.

King Shah-Bizhan: “Bah! It wasn’t just you. My traitorous son helped you.”

“Next to Herazade, is the most heart-stopping, swoonworthy male character in YA novels, today. He’s got a body like the statue of David, and a heart filled with love, not only for Herazade, but for all of the people in his kingdom.”

Herazade clasps his hand and a crimson haze blossoms on his cheeks.

Herazade cheeks blush, too. “I’m sure the readers would love to know him as well as I do. His name is Prince Sanjar.”

“Prince Sanjar, what do you have to say? You’re seated between these two. Is that on purpose?”

“Yes. My father is a tyrant. Since my mother betrayed him, he trusts no woman. While I was away in the Far East, he decided to take a virgin each night, as his wife, and then kill her in the morning, after he sought his pleasure. When I returned and learned of his plan, I was appalled. And then to discover my true love was soon to be one of his victims was unbearable. He had his men lock me away, until both Herazade and her sister would be dead. I can’t tell you my heart's joy, when I discovered she was alive.”

“You defeated the King, where others could not. Can you tell us more?”

“Let’s just say, my father was watching over me and the rest is history.”

“Thank you, Herazade. Prince Sanjar, how did you know about the three fig trees and the desert Kasbah you took you lovely wife to on your wedding night?”

A smile spreads across his handsome face. “Let’s just say a certain Djinn had something to do with it.”

“I can still see the tumult in your relationships, even now that the story is over. So can you tell my readers where they can find Scherazade’s Secret to read your story for themselves?”

It’s available as an e-book for Kindles, Nooks and all other e-readers.