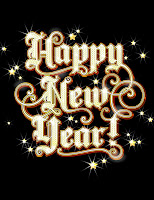 An Author’s New Year Message
By Gayle C. Krause
A new year is upon us.
May our hopes and dreams come true.
Be that contracts or agent reps
or a new book or two.
May the novels that we wrote this year,
the picture books and poems,
impress a famous editor
so that they each find homes.
May your work be recognized
with honors and awards.
And may discussions of your stories
fill the buzzing author boards.
So don’t give up your dream, this year,
fight on with pure resistance
through rejections and passes,
you must continue with persistence.
So when next New Year comes around
and the newbies are still dreaming
you’ll be embraced by loving fans
and your smile will be beaming. J
HAPPY NEW YEAR!
MAY WE ALL SEE SUCCESS IN 2011!
- December 31, 2010 1 comment:

Do Your Characters Dictate Your Story?

Some writers outline every detail of their story and follow it religiously. Others write whatever comes into their heads as their fingers hit the keys. I’ve done it both ways, though I must say I prefer the latter.
But my question remains the same. Have you ever experienced a character who insinuates themselves into your story or takes the story in another direction than what you had planned?
I certainly have. And I think it’s a cool phenomenon.
In one of my earlier fantasies I had a villain cornered in a cave. Soldiers, with weapons, were advancing on him from one side and wizards, armed with magic, had him covered on the other. He had no escape (as far as I knew). Then lo and behold he moved a rock in the cave, flipped a lever and a rocket type machine rose from the cave floor. He climbed aboard, flicked a switch and roared out of the cave above the good guys’ heads and escaped through the sky.
Nope, that wasn’t planned. It just happened. He wasn’t ready to be captured because he had more mischief to cause and more scenes to be in, only I didn’t know it at the time.
In a more recent contemporary novel my MC had no best friend. But a voice kept insisting she be in the story. She started off texting her, then calling her, then visiting her, until she wormed her way into the story as a full-fledged character. She was her best friend from her old hometown and her powerful voice made an awesome addition to the story.
That wasn’t planned either.
Another thing that characters do behind your back is change their behavior. Do you ever find that the characters you have drawn up don’t like the voice or personality that you have assigned to them?
Twice I have had characters change on me and wasn’t even aware the change was coming until I got to the climax of the story. In one instance, the MC’s best friend’s brother went from being a secondary character to being the actual villain.
And in another, an insignificant secondary character became an undercover agent for a secret organization and his role was all an act. He went from being a total jerk to being one of the good guys.
How that happens I’m not sure, but it even happens to me in picture books. A few months ago, I wrote a Halloween story about a cookie-loving vampire who had four monster friends, one of which was a girl skeleton. She was the least vocal in the original picture book. But that’s because she wanted out of the story and wished to be featured in a story of her own. Two weeks later, my focus went from the vampire to the skeleton and now I have a much stronger Halloween picture book ready to make submission rounds.
So tell me, do you have characters, who dictate their roles in your stories? I’d love to know some of your experiences with your characters.
Please leave your comments below. J
Oh, and here are some books I’d recommend for developing those outspoken characters.
45 Master Characters, Mythic Models for Creating Original Characters by Victoria Lynn Schmidt
Creating Character Emotions by Ann Hood
Breathing Life Into Your Characters by Rachel Ballon

And my favorite….
Bullies, Bastards and Bitches; How to Write the Bad Guys of Fiction by Jessica Page Morrell
- December 26, 2010 3 comments:

Interview with Karen Orloff - author of "I Wanna New Room"

14. And for fun, something that not a lot of people know about you:
I was so shy as a child that I was afraid to raise my hand, even if I knew the answer.
Thank you for sharing your writing and publishing experiences with us, Karen. Good luck with "I Wanna New Room" and your other picture books. :)
- December 17, 2010 4 comments:

Email ThisBlogThis!Share to TwitterShare to FacebookShare to Pinterest
Labels: Interview with Karen Orloff 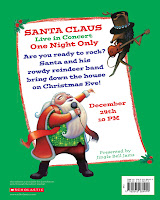 Well the day has come when an autographed copy of ROCK STAR SANTA will be flying through the sky to the winner. I’d like to thank all of you who participated with sharing your special Christmas moments.
I so wanted everyone to win. Luckily, random.org chose the winner. I counted up the number of entries and plugged them into the randomizer and it selected #11 as the winner.
Congratulations ***KELLY***. What a lucky break for Kelly. She is my newest follower and if she wasn’t the last to enter she wouldn’t have won. So it only goes to show that “the early bird doesn’t always catch the worm, especially if he’s a wiggily sort.”
Kelly, please e-mail me: krausehousebooks (at) yahoo (dot)com with your full name and address so I can send the autographed book your way. Please include any name(s) you would like the book made out to. 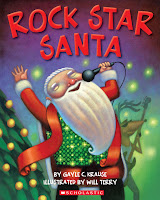 Lucky second chance! If I don't hear from Kelly within 5 days, a new winner will be picked and ROCK STAR SANTA will arrive before Christmas!
Sneak Preview: Stop back on Friday for an interview with a fabulous picture book author. Her new book, the second in a series, has finally arrived in the bookstores. You going to “WANNA” learn all about her!
- December 15, 2010 3 comments:

Vote for The Dreamweaver at Storybird

Just found a cool website that allows you to write your own picture books by using an illustrator's artwork as the prompts.

Weekly competitions and prizes. This week my picture book, The Dreamweaver, is a semi finalist. I'd appreciate your votes.

ROCK STAR SANTA "Give Away" Just in Time for Christmas!

Well, here it is December 1st already and my 100th post has arrived with a special treat. Christmas is right around the corner and I’m giving away a signed copy of ROCK STAR SANTA on The Storyteller’s Scroll. Many fans have contacted me about how to get a copy and this “GIVE AWAY” is one sure way to get it for your favorite child or for yourself..... 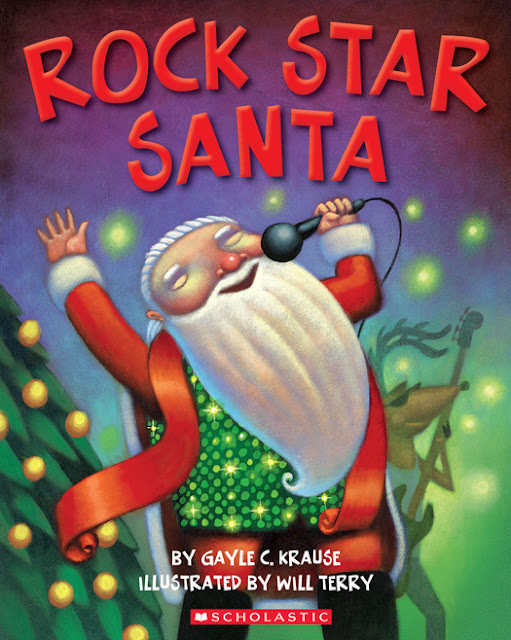 All you have to do is to be eligible is:
It’s that simple. Then random.org will select a winner. You have two weeks to post a comment and the drawing will take place on December 15th, so I can send the book to the winner in time for Christmas.
If you haven’t already read the book, here is a tease –
It’s Christmas Eve. The tree is lit and children await Santa’s arrival, only they’re not tucked snuggly in their beds dreaming of sugarplums. They’re stomping and clapping at a Christmas rock concert where Santa is the “star.” Santa’s snow-white hair is in a ponytail and he’s ready to rock. The rowdy reindeer band includes Donner on electric bass, eerily resembling Keith Richard. Blitzen has a Paul Stanley-like star painted on his eye as he plays the drums, and you can’t help but notice the resemblance of Comet to Slash, as he shoots across the stage.
But Santa is “THE MAN.” He takes the stage, ready to sing and the lights suddenly go out. The child wakes to find himself in bed. He thinks he dreamt the awesome concert until Christmas morning when he finds a torn concert ticket in his jeans.  Confused, he stares at a silver snowflake, like the kind that covered the concert stage, flittering outside of his bedroom window. A note from Santa thanking the boy for being his biggest fan hangs on his window and green sequins from Santa’s vest glimmers on the boy’s floor. ROCK STAR SANTA is an original, modern day retelling of a Christmas classic, but what happens on this night before Christmas is rockin’.
I’ll start the Christmas ball rolling. What I love most about Christmas is –
The smells of the season!
·      The balsam tree that sends off a fragrance when the lights are on.
·       The molasses crinkle cookies and spice breads baking in the oven.
·      The cinnamon candles burning on the mantle and dining room table.
·      The logs burning in the fireplace.
·      And of course, the Christmas dinner.
If you'd like to get ROCK STAR SANTA as a Christmas present, you can email me for more information at krausehousebooks@yahoo.com. 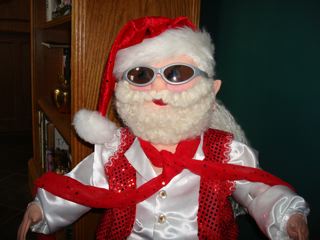