NEW POETRY CONTEST AT THE STORYTELLER’S SCROLL
In winter, The Storyteller’s Scroll ran the second annual
Fractured Fairy Tale Rhyming Contest”
It was a great success. But in both the last contest and the previous one, some participants used beloved Mother Goose characters instead of fairy tale characters. So in honor of their favorite Nursery Rhymes we’re running a rhyming contest, this time using “MOTHER GOOSE CHARACTERS”
Starting June 1, 2011, participants will be able to submit their fractured nursery rhymes for a chance to win a rhyming picture book critique from First Peek Critique Service, valued at $75.00. Winner will be announced on June 14, 2011.
Here is an example:
Rules:
ie: Little Miss Muffet from the Spider’s POV
Spider’s Response
by Gayle C. Krause
Miss Muffet hates me and I don’t know why,
so I’d like to take this time to reply
to her accusation that I scared her away.
I was only spinning my web on that day.
You say she’s innocent. That’s sure a joke.
She’s a drama queen who whines to the nursery rhyme folk.
As for missing her lunch, she eats curds and whey
from sunrise to sunset, everyday.
I don’t know what you all think I did.
She was so busy eating she thought that I hid
under an eave and then dropped down beside her.
Give me break. I’m a web-spinning spider.
Me? Apologize? For what may I ask?
I was minding my business with my spidery task.
If she paid more attention before she sat down
she wouldn’t have tarnished my name around town.
Have fun! Let your imagination fly. See what you can come up with. Make Mother Goose proud! J
- May 27, 2011 6 comments:

Hi folks!
Spring is Conference time. In April I participated in a peer critique group at a PA SCBWI conference and in June I will be meeting the authors of the novels I am currently critiquing. All together, I have critiqued 165 pages. That’s the size of a whole novel.
So what did I observe when critiquing these awesome samples of writing?
Here are some examples:
2. Make your "danger" believable.
a.  Don’t throw in a scene that sounds scary or exciting just because every writing book suggests you do. The danger your character exoeriences must relate to his/her story.
3. Throw a monkey wrench in the middle of the drama. Include something unexpected to make the reader want to keep going.
4. Pay attention to pacing.
a. too fast? Slow it down with some basic description, not flowery over the top double adjective description.
1. use longer sentences
b. too slow? Add dialogue.
1. incorporate short, staccato sentences to make scenes more suspenseful.
2. Make scenes take place in a shorter rather than longer time frame.
5. Use hooks at the end of each chapter to keep reader turning the pages.
Activity: Since agents and editors want to be sucked into your story immediately go back to your first scene in your first chapter and:
1.    Highlight tension in RED.
2.    Highlight character’s feelings in PINK.
3.    Highlight actions in BLUE.
4.    Highlight dialogue in PURPLE.
5.    Highlight character’s inner thoughts in GREEN. 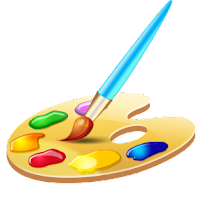 Well, I’m off to splatter my critique partners’ pages with color. Together we can create a masterpiece. Try using this color critique method with your next critique group.
- May 06, 2011 2 comments: