And The Winners of ROCKSTAR SANTA'S BOOKBAG GIVEAWAY ARE... 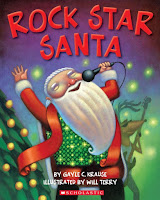 You all came up with wonderful little rhyming ditties, perfect for the holidays. I wish you could all win. It was very close, with so many well-crafted poems.

In some, I see the kernel of a whole picture book. If you allow yourself the freedom to continue your line of rhyming thought, you might find you have a saleable manuscript. J

For those of you who have entered, but did not win, I have a consolation prize for you….

I will critique a query letter from each of you, within the next three months, that you may use to an agent or editor. This is a $50.00 value from my FIRST PEEK CRITIQUE SERVICE located on my website www.gayleckrause.com

Offer expires March 16, 2019. You may contact me at info@gayleckrause.com

And now to announce the winners:

Prize #1  a picture book critique from my wonderful editor at Clearfork/Spork Publishing, Callie Metler-Smith. (must be no more than 500 words- rhyme or prose).

Vixen's Off Season--by Katrina Swenson
Yes, Vixen had a Christmas gig. It paid the bills, ya know?
For that much pay she’d smile her way ‘cross rooftops in the snow.

But while she zoomed from roof to roof, beneath the sparkling stars
she dreamed of scales and ticket sales and strumming old guitars.

When Santa let her off the clock, she traded bells and sleigh
for microphones and dulcet tones and stages where she’d play
her six-string underneath the lights, as fans filled up the floor.
All year she strummed and crooned and hummed, ‘til Christmas came once more.

And for Prize #2 there was a tie…. You both win a rhyming picture book manuscript critique from me.

DASHER'S DREAMS by David McMullin
Dasher has dreams of her very own show
with ten back-up elves and electrified snow.
As garlands of jingle bells swing wide apart,
she'll sled center stage so her concert can start.
She imagines the roar as the crowd shouts, “Hurrah!”
Yes, that is her wish, but there's one major flaw.
Though stardom may be every crooners big dream,
she'd miss being part of her deer little team.
and

Up on the rooftop, reindeers pause.
They’re patiently waiting for Dasher because,
He’s lighting eight candles to mark the last night
Of Chanukah wonder before he takes flight.
Yes, Dasher P. Greenberg is Jewish, which means
He doesn’t do Christmas or keep its routines.
But on Christmas Eve, when the sleigh leaves each home,
He calls, “Happy Christmas and to all a SHALOM!”

Sweet little Dancer’s one talented deer,
She uses her flying skills throughout the year.
When not helping Santa as one of his squad 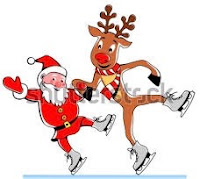 She’s out on the ice perfecting her quad!

For she’s an ice dancer, a prancer, a flyer.
When she leaps and she jumps, she’s really on fire.
Her spins are fantastic, her footwork sublime.
But she’s back at the sleigh, Christmas Eve, right on time!