Interview with Mike Sullivan - "An Eyeball in My Garden" poet

At last, the time has come. We join in the Halloween spirit by celebrating the release of  “An Eyeball in My Garden” with the first of a series of interviews with the SPOOKTACULAR poet authors from The Poets’ Garage. First up is Mike Sullivan. 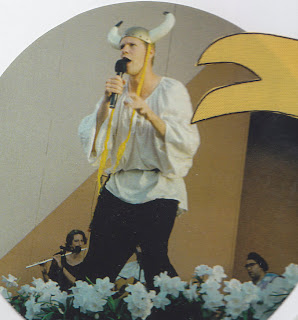 #1. What is your “favorite” spooky poem from the collection?
“Haunted” is currently at the top of my list. The writing and the illustration for it weave the scariest piece in the whole collection, I think. I don’t know if many people know this but William wrote it while on chamomile tea.
#2. Where did your inspiration come from for your particular poems?
The simple answer: things that scare me. Another answer: therapy. A third answer: oh that chamomile! (Okay, I actually don’t drink tea. I find it disgusting. Especially chamomile. It’s like old Japanese soup.)
If you’re still reading, trying to find the true answer…
Spooky! Since the theme of our book was “spooky” I wanted to personify it. Make it an actual person or creature, who just by his presence terrifies you. In the end, I pictured a chase scene starting on the “darkest street” that would run madly back to the house and inside, where guess who waits?
Sinking Ship! I wrote this as an acrostic with “SPOOKY,” more cheesy attempts to find my way into the anthology. In the original version the main character was a rat. Half of the six lines got tossed out and with some great suggestions from Garage critters, the MC was changed to a ghost. (Thanks, Laura!) And the acrostic was dropped, too.
The Corner! Have you ever woken from a nightmare and in that split second of being conscious again there’s a dark in your room that goes beyond the nighttime? I imagined that as a more permanent fixture in my room.
The Giant’s Pocket! I wrote this in a hurry when more poems were requested for the anthology. I had time to get only one critique on it, I believe. Susie Sawyer delivered. Bless her! For this I just thought of being trapped and the helplessness this creates. That feeling can be enduring, whether you escape or not.
#3. How does feedback from the other poets affect your final decision?
As you can see above, it makes all the difference in the world. Just for yucks, here’s the first version of Sinking Ship, since it’s the shortest.
Scary was the water as it rose above me head.
Poor sleepin’ cat  ‘n crew ne’er made it out of bed.
Out a port I shot meself before the ship went down.
Oh there’s not another death that equals bein’ drowned!
Killed by Mother Ocean, fillin’ the belly till it’s fat,
Y’know it’s times like these, I’m glad I am a rat.
This one probably went through the wringer three or four times. The ghost, as I mentioned, was Laura’s idea. I think she may have given me the Spanish Coast, too. I could have disregarded all the suggestions on it, but this is roughly what I would have ended up with. Whereas once people started asking questions and telling me what they liked and didn’t like, I really got a picture of what worked and what didn’t.
The same happened on Giant’s Pocket to some extent. Susie took a sword out and chopped away at some of the wording. The middle section really. It used to read “I’ve forgotten about hunger…” and followed that pattern for that section. When she suggested I switch it to “I don’t remember” it was like a light bulb went off. I suddenly knew “I feel I’m in the pocket” for an opening would be stronger if it was a fact, not a feeling. So, “I’m stuck inside the pocket…” became the first line. That urgency helped shape and fix the rest of the poem for me
#4. How long have you been a rhymer?
I’ve been writing poetry since Shel Silverstein invaded my head in second or third grade. I wrote a whole notebook of poetry copying his style (and many of his ideas!).
#5. Do you write varied forms of poetry for children?
Not at this moment. I believe there are a few rhyming picture books in my files somewhere, but other than that I haven’t experimented greatly with other forms of poetry. A theater group I was in used to perform improvised limericks for children but, alas, none of them ever made it to print. I try to write in a bunch of different genres – MG novels, short stories for adults, picture book and magazine stories for children. These keep me busy enough.
#6. How are you personally promoting your group’s debut book?
The local community college, John Tyler Community College, is having a Halloween celebration with a run and family events, including storytelling. I will be one of the featured storytellers.
Two local elementary schools are interested in storytelling and I’m in the process of booking those.
I am working with Barnes & Noble here in Richmond to arrange a reading and signing.
I have sent emails and, hopefully, copies of the book to newspapers and a magazine I once worked for, as well as to Richmond publications, libraries, and people in line at Starbucks. (Okay, I don’t actually drink coffee either. I was heavily reimbursed for mentioning Starbucks. Got a bonus for just saying it again!)
I am also heavily involved in launching the Eyeball Blog where people can read lots more about “An Eyeball in My Garden”.
#7. Do you plan to do any book signings? If so, where can fans find you?
Whoops! One of the goals of The Eyeball Blog is to establish a calendar for our writers. I plan on listing my own events on that page, as well as listing them on my own website: http://www.msullivantales.com.
Thanks for listening, Gail! You’re the best. 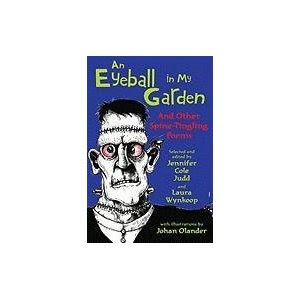 Thanks, Mike. What great insight to the "spookalicious" poems in your first book. Next up....
Laura Wynkoop
- September 13, 2010

Email ThisBlogThis!Share to TwitterShare to FacebookShare to Pinterest
Labels: Eyeball in My Garden interview