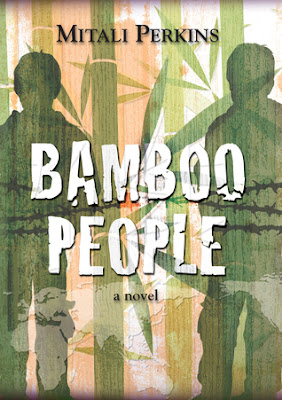 It’s hard enough being a teenage boy, but to be living in a war-torn country, where your mortal enemies destroy your village and the lives of your people and you are expected to make the decision of your life and the life of one of your enemies. . . all bets are off.

Chiko, a peace-loving Burmese boy, who worries about his mother at home, and his father in prison, is kidnapped by his own people and forced into the army. There, he befriends a street boy, Tai, who shows him how to survive in unbearable circumstances. In exchange, Chiko teaches him how to read and write.

But their trials never end and Tai always takes the punishments for Chiko, until that fateful day, when the commander orders Tai to become a mine clearer and Chiko volunteers for the dangerous duty because Tai must save his sister. Chiko steps on a land mine and is found by Tu Reh, a Karenni boy, who fights against the Burmese army. Tu Reh’s father leaves him to make the decision concerning Chiko’s life and he decides to take him to the local healer.

Too severely injured, he must be taken to the Karenni village, where the doctor will amputate his infected leg. But the Karenni do not believe Chiko is an innocent boy. Tu Reh must convince the village council that Chiko is not a spy. Ultimately, the Doctor takes him to a clinic to get a prosthesis and he is sent back home to his mother, his friend Tai, and the love of his life, Lei. To make for a happy ending, his father is also released from jail.

Written in two POV’s, this is an interesting cultural story that brings to light the issues of human rights in Burma/Myanmar.